This is the seventh issue of Best Scottish Poems, an online selection of twenty of the best poems by Scottish authors to appear in books, pamphlets and literary magazines during 2010.

We began by publishing this annual selection on St Andrew’s Day, to wave a poetry flag for Scotland, but last year moved publication to March to allow editors to consider a whole calendar year. Bookshops and libraries – with honourable exceptions – often provide a very narrow range of poetry, and Scottish poetry in particular. Best Scottish Poems offers readers in Scotland and abroad a way of sampling poets’ range and achievement, their languages, forms, concerns.

It is in no sense a competition but a personal choice, and this year’s editor, Jen Hadfield, has viewed poetry from her eyrie in Shetland, with one or two extended sessions in the Library in Edinburgh. She follows Hamish Whyte, Richard Price, Janice Galloway, Alan Spence, Rosemary Goring and Alan Taylor, and Andrew Greig, in selecting the poems that most appealed to her – the previous selections are still available on this site. We are delighted that Roddy Lumsden has agreed to edit the 2011 edition.

We hope that you enjoy this varied selection, along with the poets’ own comments and the editor’s, and that it will encourage you to browse further on the Scottish Poetry Library web site, as well as borrow and buy from the Library.

We didn’t have a great summer in Shetland last year. It was grey and chill and my veg didn’t do well; the garlic got mildew. But the arrival of the first bundle of books and pamphlets to read for Best Scottish Poems 2010 coincided with an early hot blast. I spent a lot of time on a Mexican blanket in the back garden, oblivious to the winter-wan backs of my ankles burning so severely that they’d shed scorched skin, python-wise, for months. I don’t smoke, but I did. I smoked and fetched tea and stumped about barefoot with a laundry basket in order to combat poem-blindness. Perhaps I’m not the only reader who has mistaken a bit of writing for a poem just because it appeared in a book. The cat staggered in and out of the dog-roses, pie-eyed with heat. I returned the first poem-parcel to the Scottish Poetry Library. A second arrived.

I came to Edinburgh to inspect the periodicals. A few months later, Julie kindly sent a further list of new poetry releases. I was jetlagged, on my way home from Canada. The sight of the infamous SPL trolley, where the staff had kindly compiled the eligible publications, made my eyes water. There’s a chair in my dear friend’s kitchen where a person might sit who faces a stern task. I lodged there with a double stack of books, trying to articulate and justify, heaven forfend, my convictions and prejudices about what I do and don’t call poetry.

I’m sure I’ve heard a poet assert recently that they could tell whether a poem was a poem just by looking at the shape of it on the page. I can’t, but I’ve decided to give greater credence to the curious dissatisfactions and suspicions raised by such chunks of text as seem to be poems but turn out to be decoys: that fail to tick, thrive, vibrate, gain or shed electrons… you can choose almost whichever metaphorical verb you like, but it seems important that it should be a verb. I encountered a lot of poems last year that were like printed circuit boards, those inscrutable wafers of dark green plastic obscured with wire and solder that come out of computers: closed, coded things, nouns. They might work, but they work for themselves, by themselves, in privacy, like a beehive or wormery.

Predictably, my longlist was settled by abstract rather than technical clues, because I was not, first off, looking for technicians. I was looking for hunches and forebodings. Did the poem vibrate beyond its last line, as Edwin Morgan’s so often do? Were they, as A. B. Jackson has it, ‘awash with voices’?(1) Instead of beginning or deciding to read, did I succumb to reading and, succumbing, forget myself, thankfully? Did the poem make me long to be a poet again: did it fetch language out of me? Did the poet write with a degree of compulsion? Did the poem insist, as Noah’s wife declares in Eunice Buchanan’s poem: ‘I will hae ma say’?

I hope you’ll agree that a linguistic range is represented in these poems. I also hope you’ll agree that linguistic range just happens to be represented, happy situation that that would be. I was determined that no poem should earn its place by dint of a decision to be inclusive, but because each poet had an instinct for poetry as ‘spoken’ or as ‘livin’ language.(2) By this I mean I was looking for poems that were sophisticated in suggestion; apparently unselfconscious; apparently involuntary. Fluent to the point of teetering on the brink of babble, sometimes, which sounds like a criticism but couldn’t be further from it. Walking that line. Possessing some kind of stile or ‘interface’ (as Edwin Morgan might have put it) for the reader to enter the poem and collaborate in the act of making sense. An alternating current. Courteous, in that way, yet not necessarily ‘accessible’.

But perhaps it isn’t chance that such poems were often in Scots or dialect. The recent threat or proximity of loss can result in sensations being experienced more acutely, including a heightened awareness of language. Perhaps this is just how poetry works. We write urgently when we apprehend we have something to lose. And we all have something to lose. The present tense, for a start.

I dislike it when people ask me about Inspiration, because the question generally has a fey whiff to it. But I have to deal with it, because the poems that I long to read are, as Alan Gillis puts it, in ‘The Green Rose’

…unforeseeable
lines [that] swooped and made him think someone stooped
to pluck and blow him through the four winds.

So above all I looked for poems which had that quality of having originated beyond the poet. There’s something necessarily creepy about a compelling, disembodied voice, especially when it brings tidings from such peculiar places. For this reason, I hope the selection sometimes gives you a bit of a shiver.

The house is wind-thumped, and the first shoots of daffs are inadvisedly showing. I’ve begun making over-ambitious plans for my garden again and I’ve finally arrived at my anthology. I’m enjoying some accidental patterns in the selection. A lot of flowers and foliage crop up in these poems but, I’m pretty sure, no sprigged wallpaper. Alan Gillis’s sequence, being on the mythic side of certainty, sums up my feelings about my Best Scottish Poems of 2010. I hope you will find all of these poems to be ‘green roses’. 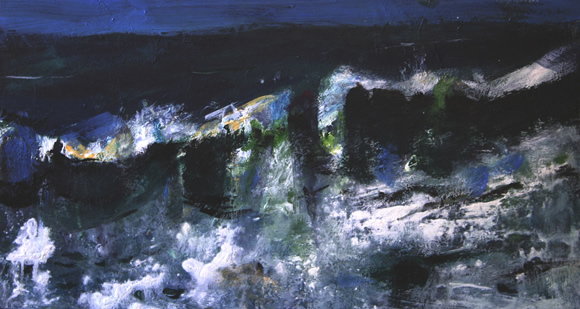 “I was in St Andrews one windy day in September 2010 to meet with Eleanor Livingstone and Jean Johnstone to discuss work to be exhibited at StAnza in March 2011. I had recently had a horse-riding accident and started to feel unwell as we were looking at the different venues. Even though I felt dizzy and weak with the after-effects of concussion, I couldn’t leave St Andrews without going down to the harbour to experience the amazing waves crashing onto the beach. There were lots of people out surfing, falling into the water and being tossed about by the waves. It was so windy yet it was a bright, sunny day and it all looked so exhilarating. My response was Stormy Day 1.”

She has had work selected for and exhibited at Edinburgh Printmakers Gallery, Leith Gallery, Gracefield Arts Centre, the RSA annual exhibition; a solo exhibition at the Park Gallery, Falkirk and an Artist’s Residency  at the National Library of Scotland. The residency culminated in an exhibition, ‘Words Out of Place’, which was inspired by emigrant letters, maps and writers’ manuscripts. It was described by Stuart Kelly in Scotland on Sunday as a ‘poignant and sotto voce display with more than a hint of Ian Hamilton Finlay about it’.

In 2009 she was selected to be one of two ‘Homecomers’ at Spring Fling in Dumfries and Galloway to create a site-specific installation in a barn. With a grant from CABN/Scottish Arts Council Visual Artists’ Award, she made Hymn to the Road, a short film shot from horseback as she rode the Cross Borders Drove Road.