This is the third issue of Best Scottish Poems, an online selection of twenty of the best poems by Scottish authors to appear in books, pamphlets and literary magazines during 2005-2006.

We publish this selection on St Andrew’s Day to wave a poetry flag for Scotland. Bookshops and libraries – with honourable exceptions – often provide a very narrow range of poetry, and Scottish poetry in particular. Best Scottish Poems offers readers in Scotland and abroad a way of sampling poets’ range and achievement, their languages, forms, concerns. It is in no sense a competition but a personal choice, as this year’s editor, the novelist and poet Janice Galloway, makes clear. She follows Hamish Whyte and Richard Price in selecting the poems that most appealed to her – their selections for 2004 and 2005 are still available on this site.

We hope that you enjoy this varied selection, along with the poets’ own comments and the editor’s, and that it will encourage you to browse further on the site, as well as borrow and buy from the Scottish Poetry Library.

I’d love to say that putting together this perennially arguable ’20 Best Poems’ over the past year has been all pleasure, but if I did, I’d be being somewhat slant-on with the truth. As every Scot knows, there’s always a downside.

I should say right away that reading the poetry was not that downside. In fact, reading was the uppest side of all. The Scottish Poetry Library’s books, its wide range of pamphlets and periodicals were mine to shamble through as I pleased, and I did. More still mostly from ‘free poetry’ websites or random findings. Reading till I dreamed about poems was a literally heady experience, and while such shameless stuffing is perhaps not the most advisable approach to poetry as a rule, this rare permission to pig out afforded unexpected and cherishable benefits. I found the taste for poetry, like salt-roast almonds, indecently more-ish; no matter how much I packed away, there was always appetite enough for another, another. Any lover of the exactly-turned phrase, the mot just, the enthusiast for variegated voices and visions, would, I’m sure, have found the same.

Part quest, part curiosity, as much simple need for entertainment as need for meaning, the reading of poetry is an essentially humane activity. It creates pictures in the head, other ways of seeing, hearing and being: it deepens awareness of and interest in the gaze of other human beings. Poetry can enthuse or console us, help us see how the world and its bewilderments might be captured or at least touched upon in something slippery and shady as language. And it does it in a precise and metrical way, a music, that enlists memory and imagination so well that often we are able to recall its lines, phrases and vivid word-pictures for a lifetime.

So, you’re wondering, what on earth could the downside be? Writing this introduction, that’s what. I’m sure there are some who enjoy expounding, explaining or expanding a guide to editorial principles or the like, but I bet not many. Introductions tend to get in the way of the otherwise immediate personal exchange between reader and writer that all literature, essentially, is. They interfere. Intermediary by definition, the introduction-monger is doomed to generalisation or abstraction. Unless, of course, they sneakily resort to the personal. Fortunately, at least on this occasion, I can do that with equanimity.

I chose to choose this year’s poems because it was irresistible. Like a bunch of tickets to every new theatre show, opera, gallery exhibition and concert in the country, the chance to read the collected works of a year of Scottish poetry (by poets Scots and Scots-published by adoption, birth, love or accident) was a gift. I hoped for education, enlightenment (or something like it) and fun and found all of that and more besides. I also found clear prejudices within myself as to what counted, what spoke, what stayed.

It’s no revelation that people are often drawn to poetry particularly in times of emotional extremes. In love, grieving, for a birth or death, when we’re lonely or deeply at peace, poetry seems a natural thing to turn toward. Seeing how others see, we find ourselves into the bargain, agreeing or wondering at how different the same place on the landscape looks when seen through another’s eyes.

I found a strong preference for brevity, the tactile and the plain; an aversion to sprawl, groups of polysyllables, foreign words or Latinates sprinkled for romantic connotation without precise or clear effect. Point-blank shots of the plainest language went straight to this heart every time, while it drew back from the evasive or obscure. Thank goodness, I found as much light as dark to admire, as much of joy as pain. The doubtful and emotionally-mixed I returned to with greatest fascination. What did not surprise me was my bond with poems in which the everyday became particular, or in which the singular became the experience of Everyman / Everywoman / Everydog. Finally, and almost against my will, I found something to say about Scottishness, long a subject I have found limiting, irritating or simply beside the point. And it’s this.

In this age of ready translation, international web access and mass publication, poetry need have no nationality. Forms, themes, histories, and propagandas may be held in common and whatever the local origins of the poem, meanings, messages and forms can carry themselves to other cultures, sexes, creeds or places if it is open enough. And we, as Scots, are now confident enough to know it. Very little of what I read this year felt a need to carry a tartan tag. It was confident enough to stand its ground and not worry it would be taken away. The ‘who are the Scots?’ identity-obsessed neurosis our academics have attempted to force us to address as our true subject is being resisted in the best way viz. by being largely ignored. Whatever the hell we like enters our thinking and motivation as writers, thinkers, believers. Our truest work is to say so. The poets here are too full of other things, wider things. More humane, more humble and yet more confident things. More thrawn things. Here’s to that.

Some poets presented a continent of styles and subjects in themselves, others gave glimpses of whole worlds in rice-grain lettering; some turned away from the local while others embraced it, even from a distance or a dream. All those reprinted here are, in strikingly different ways, international. Some are new poets, some already well-versed and honing their skills ever keener. Scotland is lucky to have a wide range of new and impressively stickable, mature talent.

I hope those who browse here find something of the personal for themselves too. If not, find your own twenty. You’re not helpless and the Scottish Poetry Library is there to assist if you think you are. Read it fast or slow, the choice is yours. And with no downside at all. 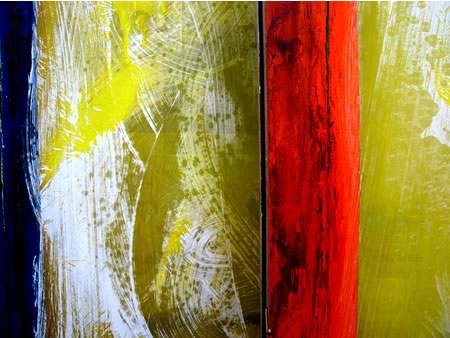 This picture is one of a series of photographs from the exhibition ‘Evidence’, by Norman McBeath, shown at Edinburgh Printmakers in October 2006 with an introduction by A.L. Kennedy. The photographs explore the traces of behaviour – the cuts, stains, smears and abrasions left in the wake of printmaking – “the ruin, and the wonder that our creativity and curiosity leave behind” (A.L. Kennedy).

Norman McBeath is an independent photographer and printmaker based in Edinburgh. The National Portrait Galleries in London and Edinburgh have fifty of his portraits in their permanent collections. He has recently had work showing in the Leica Gallery in New York and the Royal Scottish Academy in Edinburgh; and a solo exhibition, Oxford at Night at The Ashmolean Museum in Oxford – the first exhibition by a living photographer in the museum’s history. A book Oxford at Night (Easel Press) was published to coincide with the exhibition with an introduction by Jeanette Winterson.