This is the fifth issue of Best Scottish Poems, an online selection of twenty of the best poems by Scottish authors to appear in books, pamphlets and literary magazines during 2007-2008.

We publish this selection on St Andrew’s Day to wave a poetry flag for Scotland. Bookshops and libraries – with honourable exceptions – often provide a very narrow range of poetry, and Scottish poetry in particular. Best Scottish Poems offers readers in Scotland and abroad a way of sampling poets’ range and achievement, their languages, forms, concerns. It is in no sense a competition but a personal choice, and this year’s editors, Rosemary Goring and Alan Taylor, have had a chance to submerge themselves in poetry alongside all the varied work they do as Herald editors: a bit of slow cooking on the side, you might say, without the pressures of newspaper deadlines. They follow Hamish Whyte, Richard Price, Janice Galloway and Alan Spence in selecting the poems that most appealed to them – the previous selections are still available on this site.

We hope that you enjoy this varied selection, along with the poets’ own comments and the editors’, and that it will encourage you to browse further on the site, as well as borrow and buy from the Scottish Poetry Library.

Enter a high street bookshop on a quest for contemporary poetry and you’re likely emerge disappointed. Apart from a few staples, there is little to tickle one’s fancy. Not that the situation’s much better for poetry from earlier generations. Recently we wanted to find a good collection of Robert Frost’s poems. No bookshop we browsed in had anything of note.

It would be a Pavlovian response, therefore, to assume that not much new poetry is being produced. Of course, nothing could be further from the truth, as visitors to the Scottish Poetry Library will readily acknowledge. Even the most cursory study of the library’s shelves shows that the writing of poetry remains an inextinguishable human urge.

Certainly, this was immediately apparent to us as we surveyed the task in hand. Charged with finding our twenty favourite poems from the past year we were shown a trolley on which were stacked over sixty collections by individual poets, added to which were anthologies and magazines. It was a daunting if invigorating task. At times, as we waded through the poetic equivalent of slurry we despaired. Often, however, more often than perhaps we had anticipated, we found gems, some of which were by poets completely new to us. This was inspiring.

What conclusions to draw from our experience? We’ll only mention one. Apart from one or two exceptions, poets seem not entirely and convincingly engaged with the modern world. For instance, poets appear to be much more at home with birds and bees and trees than they are with the appliances which are essential to modern living. We may have missed it but not one poem dealt with the internet. What this signifies is not for us to say but it is curious.

Similarly, there were very few poems, either serious or otherwise, about politics, either local or global. Maybe poets are not interested in politics, but that’s not been our experience. Why, then, no poems about it? Why no paeans or polemics addressed to our tribunes? All of which suggests dissatisfaction. But that’s not the message we intend to convey. That’s in the twenty poems we have selected to represent 2008. We hope you will like them as much as we do. 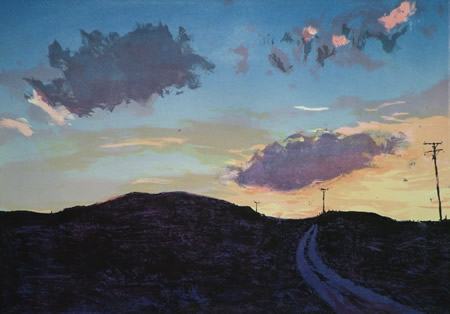 During ten long weeks at the turn of the last century, this mysterious winding road led me to my home and studio in a precarious house, on a tiny grass-cliff peninsula. Here, in the ancient abandoned feudal hamlet of Old Slains, where my father and Doric grandfather had their roots, I watched the wild sea birds, researched and directed my second short film Driven, for a major solo exhibition at the Talbot Rice Gallery, East (2001).

Roads – mostly empty, but sometimes seething with action – have featured in my work for over 25 years. This lithograph, created with master printmaker Alistair Clarke at the Edinburgh Printmakers’ Workshop, developed naturally from a still in the final sequence of Driven. The print was first published in Interactions (2004), a print portfolio featuring the work of twenty Scottish artists. A monoprint based on the same still also featured on the poster for East.”

Born in North Carolina of British parents, Kate Downie trained in Fine Art at Gray’s School of Art, Aberdeen and is now based in Edinburgh. Downie has held artist’s residencies in many countries and contexts and as president of the Society of Scottish Artists (2004-06) initiated a variety of cultural programmes related to performance art and creative film-making. Her work is represented in public and private collections worldwide. She was short-listed for the Jerwood Drawing prize in 2005, and recently elected to the Royal Scottish Academy.

Edition of 20. From the portfolio Interactions (Edinburgh Printmakers’ Workshop, 2004)