This is the second issue of Best Scottish Poems, an online selection of twenty of the best poems by Scottish authors to appear in books, pamphlets and literary magazines during 2004-2005.

Bookshops and libraries – with honourable exceptions – often provide a very narrow range of poetry in general, and Scottish poetry in particular. Best Scottish Poems offers readers in Scotland and beyond a way of sampling poets’ range and achievement, their language, their forms, their concerns. It’s in no sense a competition, but a personal choice, this year by the poet and publisher Richard Price.

We hope that you enjoy this varied selection, along with the poets’ own comments, and that it will encourage you to browse further, as well as borrow and buy from the Scottish Poetry Library.

My approach to choosing the twenty Best Scottish Poems 2005 has been this: to survey the output from Scottish magazines and presses using information provided by the Scottish Poetry Library and from my own reading over the year; to look a little at the publications of Scottish poets further afield; to make the selection a brief anthology of contemporary Scottish poetry based on a cross-section of different aesthetic approaches rather than on the basis of particular issues and identity-politics. Of course, aesthetics and subject matter aren’t completely separable, to say the least, but I have tried to make the selection varied in form.

Outwith Scotland commentators might think that publication within a British context is comparatively healthy for Scottish poets: Bloodaxe, Picador, Faber and Carcanet each have significant Scottish poets on their lists. But there is a dearth of poetry book publication in Scotland itself and though the small press and the internet, and the welcome distribution of English-made books within Scotland (and, of course, the Scottish Poetry Library itself) certainly answer to part of the need, the small number of medium-sized publishers in Scotland may suggest an infrastructure problem. Most seriously, several of the poets here, some with several or even many full-length collections published in the past, lack current book publication at all.

I have the usual doubts of any editor as to whether there can be a Best this or that in any category of art. So this is clearly a personal choice. I declare an interest in that I am the editor of the little magazine, Painted, spoken: I have in just a few cases chosen poems which I thought at the time were excellent and which I select again here.

I have enjoyed reading so many companionable poems in the process of making the selection. The reasonable, genial, tolerant voice is a bedrock of current Scottish poetry, a kindly, rightly-compromising if mildly didactic voice which is shared in fact across all the Anglophone languages in Britain. It would be foolish to jettison it altogether or even to marginalise it. I have taken an eclectic view, though, and have especially been on the look out for poems that fall into the following categories: the creation of new forms (experimental, avant-garde, innovative, call it what you will); the renewal and command of a spectrum of older ones; sharp political verse, acidic if need be (the invasion of Iraq did, however, produce many political poems – it remains to be seen if it has politicised people and poetry in general); those that display information that the reader is not likely at first to recognise, either because the information is about topics rarely covered, or, especially, because its mode of presentation is novel; poetry which is much more self-conscious about its sound, from broad structures of rhythm to syllabic nuance; poetry which is deeply pleasurable in its sensuous and visual vocabulary, without a moral epilogue or a facile vocab list; and poetry which is as-if-in-the-experience rather than as-if-outside-the-experience.

Subject-wise I have been struck by the many references to the seasons in the poems I’ve chosen; perhaps a heightened awareness of what may well be catastrophic climate change is part of this. There have also been very touching, tender lyrics – short, not-so-simple, beautiful poems, that I have not hesitated to include. While the poets here observe domestic and intimate relations on the one hand, and the changes in the planet on the other, they also meet the challenge (here or in their other poetry) to engage in and with the vast space between: the civic and political space that poetry can also address with power.

My choice is intended to be a short cut to the range of possibility and excellence that is available. I hope these poems are as inspiring to new readers as they have been to me. 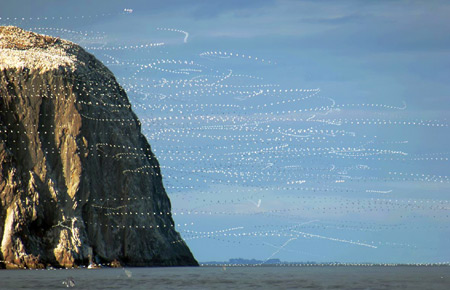 ‘The Bass Rock from Seacliff >16:14:55-16:15:01< 08/10/04’ is one of a series of three original prints by Ian Scott, which observe the Bass Rock and reveal hidden rhythms in space and time. The prints were created by interleaving digital time-lapse photographs, enhanced by use of specialist imaging software. The final images show the flight of sea birds over time. We see little more than a five second window, a brief moment in time. Image cropping further emphasises this ‘time space’; most of the rock is deliberately hidden. There is much more to this experience than can be seen.