This is the first issue of Best Scottish Poems, an online selection of twenty of the best poems by Scottish authors to appear in books, pamphlets and literary magazines during 2003-2004.

While this isn’t a new idea in international terms – both the USA and New Zealand offer similar selections – it is new to the Scottish Poetry Library, which doesn’t hesitate to borrow good ideas!

We wanted to offer readers in Scotland and especially readers outside Scotland a sample of current poetry that would suggest the range and achievement of Scottish poets, their language, their forms, their concerns. It’s in no sense a competition but a personal choice, this year by the noted anthologist, publisher, bibliographer and poet Hamish Whyte. The editor will change each year.

We hope that you enjoy this varied selection, along with the poets’ own comments, and that it will encourage you to browse further, as well as borrow and buy from the Scottish Poetry Library.

‘A healthy nation is as unconscious of its nationality as a healthy man of his bones’.
George Bernard Shaw

Scotland’s writers certainly seem to be growing less conscious of their bones and showing a more confident ability to write about anything. In the twenty sets of poetic muscles being flexed in this anthology of new poems there is little that is overtly ‘Scottish’ and what there is is often subversive (as in Matthew Fitt’s ‘Kate o Shanter’s Tale’). There was no deliberate intention to exclude Scottish matter; it just fortunately worked out that way – it’s the way things are going. Yet all the contributors were born in and/or live in Scotland.

I’m slightly uncomfortable with the term ‘best’. ‘Best’ is, of course, a misnomer. The ancestor of this volume is the series The Best American Poetry, the editor of whose first selection, John Ashbery, said that best is not the best description, suggesting instead, ’75 OK American Poems’. Well, I think the twenty Scottish poems chosen here are more than OK, but they’re the ones I liked best out of all the poems I read published between May 2003 and May 2004 – another editor would have picked another twenty entirely.

They are naturally revealing of my own taste, and what’s interesting, looking at the finished selection, have given me a clearer idea of what that might be. I’ve made what to me are disconcerting choices – for instance, as someone who thought himself committed to urban poetry, I’ve picked a surprising number of rural or ruralish poems – almost half the selection in fact.

The editor of Best New Zealand Poems 2003 (which directly inspired this one) felt there were two possible approaches in the selection: either attempt to represent as wide a range as possible or ‘plump for the poems that you like best’. I’ve plumped for the personal choice option. I like an anthology with an agenda, although I’m not sure what the agenda of this one is – in its simplest form it might be ‘poems I liked which made me laugh and think’. That’s surely a reasonable premise and it’s one different from my usual, theme-based approach.

In selecting and editing disparate work (as I’ve done many times, especially with New Writing Scotland) it is noticeable how often themes seem to emerge which are not consciously sought. Here, I can detect a rural strand, love (not difficult!), birds and animals, humour.

The only constraints I was given were of time and some kind of Scottish connection. I trawled mainly books and magazines, using the splendid resources of the Scottish Poetry Library (there must be over 80 poetry periodicals available there) and rummaging in bookshops (and having my eye caught by the occasional flier). The magazines consulted were not just Scottish ones – Scottish poets do contribute to mags furth of the border – and there are entries from Poetry Review, Envoi, and The Rialto. Twenty-five per cent of the selection came from the jumbo anniversary edition of Chapman, a cornucopeia which contains just about everybody who is anybody writing in Scotland today and which is a tribute to the editor Joy Hendry’s dedication and energy over the last thirty years. Half of the poems have been chosen from magazines, the other half from book-length collections.

So, these are my twenty best.

My brief was to make ‘an informed, personal, interesting choice, and [provide] a useful way into current Scottish poetry for those at home and abroad’. Poetry has always been the jewel in Scotland’s literary crown, and in many ways Scottish poetry is in a healthy state: the Scottish Poetry Library is a power in the land with growing offshoots, poetry reading groups are springing up, there are writers workshops everywhere, creative writing courses, National Poetry Day and even our own (and first) National Poet. The profile is high. Getting your poems published, other than in magazines, is not perhaps so easy, although there is always the pamphleteering and self-publishing tradition to fall back on.

Accusations are always being made of the big fish in a small pond variety and this selection has admittedly rounded up a number of the usual suspects (with a few not so well known names as well). In his contribution to the recent monumental tome Scottish Literature (EUP, 2002) Jim McGonigal adapts the pool analogy: Scottish poets, he says, ‘swim in a crowded pool, and as in most public pools, the atmosphere is noisy, the reflections confusing, and the swimmers of all shapes and sizes’.

I hope there’s enough noise and reflection and variety and bumping into each other in this twenty-strong shoal of current Scottish poets. 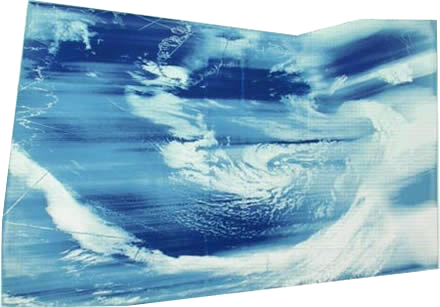 The image ‘Gale-force’ is from a series of ten original prints, From the atmosphere, by Alastair Clark.

Based on weather satellite imagery the series begins with ‘approaching storm’ which was created by altering and combining real life satellite passes. Through the series the satellite imagery is increasingly transformed showing a change of view and perspective. The sources were altered and developed using 2d and 3d imaging programmes before being combined with hands-on printmaking techniques in lithography and screenprinting. Throughout this set of prints, references are made to false-colour imaging, radar images and isobar charts which are all diagramatic conventions used by science as a way of representing organic, chaotic systems in nature.

“I like this fusion of order and chaos. Any sequence, like a weather sequence, lends itself to representing change and gives a context to increasingly abstracted images. Working within a series has allowed me to mirror the changes in nature which occur in both short and long time scales. Science has a way of interpreting and representing nature with which we are now visually familiar. It is from this filtered viewpoint that I have drawn my inspiration for this series.”